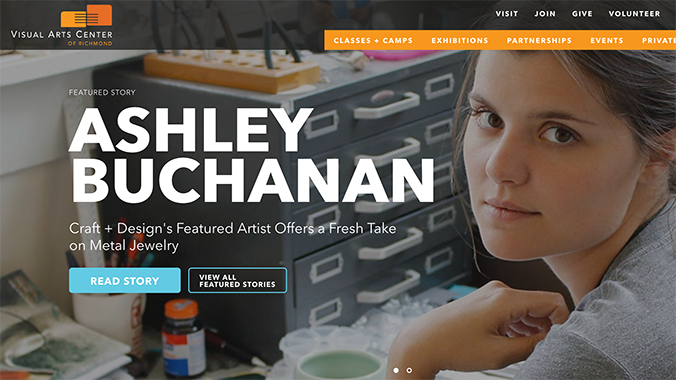 As a lead up to Craft+ Design 2016, a museum-quality show that showcases fine contemporary crafts, a series of feature stories on attending artists was written for the Visual Arts Center of Richmond. The stories were used on VisArts’ homepage and the organization’s e-newsletter.

It’s how Tennessee-based jewelry artist Ashley Buchanan hopes you feel when you wear one of her pieces. She is the featured artist at this year’s Craft + Design Show, which will take place Nov. 18-20, 2016.

Working primarily in brass, Buchanan hand cuts all of her designs, which include rings, earrings, bracelets, broaches and necklaces that range in price from $80 to $600. Taking her inspiration from historical jewelry, Buchanan creates a fresh take on decorative elements like lace, pearls and chain.

Using an unconventional method to add color, Buchanan powder-coats her designs – the same industrialized process that’s typically used when adding color to car parts, patio furniture or other metal. A limited palette of cream, grays, charcoal and the occasional hint of red or yellow gives her jewelry an understated sophistication and keeps it “very wearable,” while letting the intricacy of the designs show through.

“I like to say that I want my sister, my mother and my grandmother to all be able to find something that speaks to them in my work,” she said. “People who are attracted to my pieces are interested in art, interested in craft and are wanting to wear something new and fresh and make a subtle statement.”

Her approach has garnered much attention.

Buchanan recently attended Sculpture Objects Functional Art and Design (SOFA) Chicago for the third time and regularly participates in the Smithsonian Craft Show, the Philadelphia Museum of Art Craft Show and the American Craft Exposition. She is a 2014 NICHE finalist and was also one of ten finalists for the Society of Contemporary Craft’s 2013 LEAP Award.

She has exhibited nationally and internationally in galleries and museums such as Velvet da Vinci, Richmond’s Quirk Gallery, The Racine Art Museum and the Museum of Art and Design in New York where she was one of the artists featured in LOOT: MAD About Jewelry in 2013.

This will be Buchanan’s third time attending Craft + Design, returning after a three-year break.

“I think it’s a big deal that Craft + Design took a risk on me – to have a jewelry artist who is not using stones or precious metals as a featured artist – it’s really exciting for me and for the field of contemporary jewelry,” Buchanan said. “It shows there’s this desire and interest in having emerging, young artists who are doing something that’s maybe a little different.”

One of the things Buchanan loves the most about her work is connecting with people during the shows she attends. She said she’s been looking forward to returning to Richmond to showcase her new work and see how people respond.

“Every time I’ve been to Richmond, I’ve loved it, and I always think ‘I could totally live here,’” she said. “There’s an incredible art community in Richmond and a great range of ages who attend this show – a lot of young people are interested. In the field of craft, jewelry is such a great gateway into collecting art because overall, it’s more affordable. It’s wearable art.”