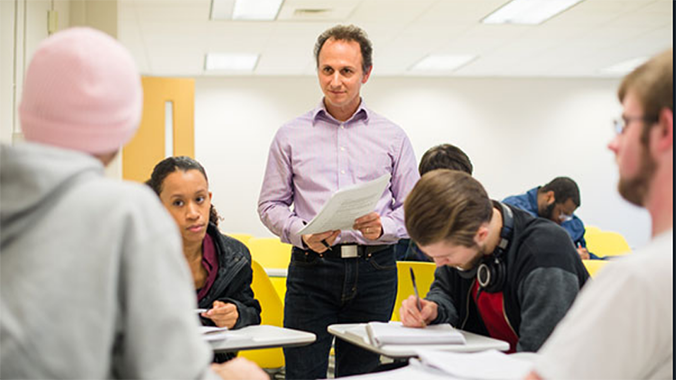 In celebration of its 10th anniversary in 2016, a series of faculty spotlights were written for the Virginia Commonwealth University Division of Community Engagement (DCE). In collaboration with VCU’s University Relations office, the feature stories were used to convey a key message that the DCE can help elevate faculty members’ teaching and scholarship by providing the training, funding and connections to engage with the greater community.

The features became part of the university’s overall Make it Real campaign and were used on the DCE’s anniversary splash page, in print and in the division’s e-newsletter.

How Do You Spark Social Change through Writing? Hold Your English Course in Jail

Kick-started by a Community Engagement Grant, David Coogan, associate professor in the College of Humanities and Sciences, developed the Open Minds program, which brings VCU students into the Richmond City Justice Center for a service-learning course.

On equal ground, students and jail residents participate in writing workshops to share their stories and perspectives.

“People who come through the program understand that they’ve just done something incredibly radical. They’ve assembled across the barriers – not only incarceration vs. freedom, but the so-called barriers of race, class, status, criminal history and gender and sexuality differences. They’ve managed to make a mockery of the idea that diversity is a problem. Diversity is what makes this class great. They’ve realized we’ve always been one, and there really is no ‘other.’”