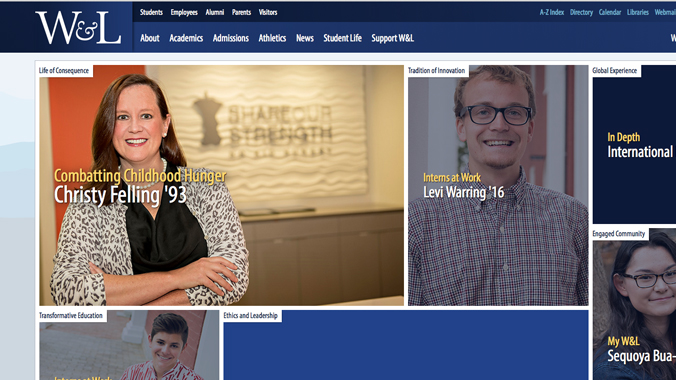 In the fall of 2015, new alumni profiles and feature stories were written for use on Washington and Lee University’s homepage, providing dynamic content to connect with prospective students, alumni and donors.

Christy Felling ’93 was born a “political junkie.” Growing up in small town in Delaware and inspired by her grandmother’s political activism, Felling always felt she was bound for Washington, D.C.

“When I was a little kid, my grandmother would sit me down, and we’d watch Watergate hearings together,” Felling said. “She was always protesting something or writing to members of Congress – it was just woven into the fabric of her life. She instilled in me this passion for politics and passion for trying to do something of value in the world. If you have the capability to help someone or make a difference, it’s your duty to do so.”

After attending a summer enrichment program at Washington and Lee the summer between her junior and senior years in high school, Felling “fell madly in love” with the university and applied early decision.

She arrived on campus in 1989 as part of the first class of students that would experience W&L as a fully co-educational institution. She majored in political science and also took a lot of history, English and Japanese courses, with the intention of pursing a career in political journalism.

“Getting to W&L when I did was huge for building the confidence and skills that I still use today,” she said. “At that time, it was not uncommon to only have one or two girls in a class or discussion group, which could be a little daunting. But the professors wouldn’t take that as an excuse to not speak up. I learned to get my ideas across, and to this day, in a board room or in meetings, I am rarely intimidated.”

Felling also credits Professor of History Emeritus Barry Machado for teaching her that power comes from working harder than anyone else. She said he was known for being really tough, turning students away who were late for class and insisting on excellence. Felling took every one of his classes she could fit into her schedule.

Professor Machado’s lessons would benefit Felling during one of her first positions after graduation. As the executive assistant for Executive Editor Al Hunt at the Wall Street Journal, Felling started out managing Hunt’s schedule and researching topics for his columns and television appearances.

“He was known for being a very smart, but very tough boss,” she said. “I knew I had to show him what I was made of while trying to learn as much as possible. I challenged myself to turn the position into more than it started out as. It became my professional bootcamp, and it really helped to build my career.”

Just as Felling began looking for her next career move, the terrorist attacks of Sept. 11 happened. Her office was just blocks from the White House, and the events of the day became a turning point in her career. Instead of reporting on what other people were doing to make the world a better place, Felling wanted to actually be doing it. She took a job as deputy director of strategic communication with the Center for American Progress, a progressive public policy research and advocacy organization.

“Over the course of my seven years there, my position changed several times,” Felling said. “I’m a big fan of pitching yourself. Bring your greatest skillset to the job at hand and adapt that job. I’ve found that I excel at the ‘giddy-up’ – when you’re ready to move the ball forward, I’ll come in and make it go.”

It’s this very skill – Felling’s self-proclaimed “action ninja” trait – that led her to her current position as the director of strategic communications for Share Our Strength/No Kid Hungry, a national nonprofit that works to end child hunger in America through its No Kid Hungry campaign.

“So many of the things you work on in D.C. – loud problems with a capital P –  are too big or entrenched to change,” she said. “It was frustrating to me to never see the needle move. I wanted to have more of an impact and was ready for a change.”

After several professional contacts sent her the job opening for director of public relations for the organization, Felling decided to make the move. She eventually shaped the position into one that allows her to work on national messaging and political strategies for the organization.

“Childhood hunger is actually a solvable problem,” Felling said. “We’ve got the food, and we’ve got the hungry kids. Now we just need to connect the two. In one of the wealthiest countries in the world, we can figure this out.”

This fall, Felling was a host on the university’s Public Policy and Government Trip to Washington, D.C. Twenty students spent Reading Days visiting the workplaces of about 18 alumni, and Felling was excited to let the students see what it’s really like to work at the national office of a nonprofit organization.

“We’re run very much like a corporation – results-driven, fast-paced and action-orientated,” she said. “Making the world a better place is not something that is done only on the weekends or as a heartfelt hobby. It can be a career that is fulfilling. Yes, we’re the idealists, but we’re the idealists who are getting stuff done.”