Elsie Stossel Upchurch: A Legacy Made of Milestones and Mortar 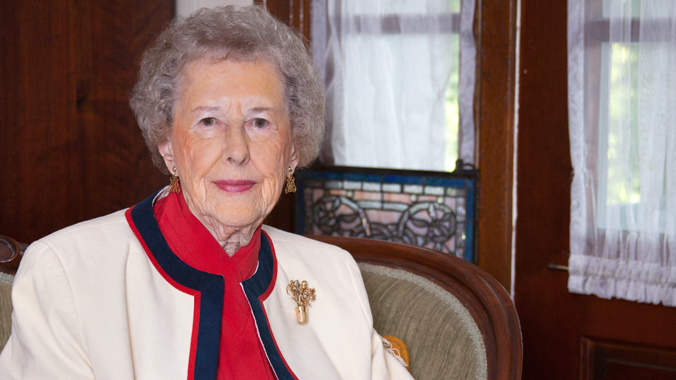 In 2012, a series of feature stories were written in support of Longwood University’s comprehensive fundraising campaign, spotlighting major donors and initiatives. The features were used online and in printed publications.

In 1939 Elsie Stossel Upchurch began her studies at Longwood University, known then as the State Teachers College at Farmville. Born and raised in Front Royal, Va., Upchurch spent her childhood summers visiting her aunt and uncle in Farmville. When it was time to decide where to attend college, Longwood felt right. Her first year on campus happened to coincide with the university’s 100-year anniversary.

Diving in to campus life, Upchurch was a member of Tri-Sigma sorority and president of the drama club. Her first job with the club was “curtain puller” for campus productions. Upchurch knew everyone on campus and happily remembers how much she enjoyed walking to her English classes, stopping to chat with friends and professors along the way. During her junior and senior years, she lived in the Cunningham Residence Halls.

Little did Upchurch know, as a first-year student, that her life would take many twists and turns, always intersecting with her alma mater. Ultimately the residence halls she once called home would be replaced with a new student center that bears her name. With ground set to break on the project during the university’s 175th anniversary in 2014, Upchurch’s history and legacy will forever be part of its bricks and mortar.

After graduating from Longwood, Upchurch moved to Richmond and spent the first part of her career as a teacher.

“I always liked seventh grade,” she said. “I’m not sure why, because that’s usually everyone’s least favorite. I just liked the age.”

She taught middle school English for several years, and then led the guidance departments for Richmond-area middle schools. She met her husband, Norman Upchurch, in Richmond, and their first year of marriage proved to be a true test.

“As the signal supervisor for Seaboard Coast Line Railroad, he worked all up and down the East Coast that first year,” Upchurch said. “He was based in Jacksonville [Fla.], and I was working in Richmond. He’d ride the train up to see me every weekend, and he never missed a weekend.”

Soon after that first year, Norman Upchurch became the purchasing agent for RFP Railroad, and the couple was reunited in Richmond, where they lived for 40 years.

During her time in Richmond, Upchurch made quite a few trips to Farmville, serving as alumni association president from 1957 to 1965. She remembers staying with Longwood President Francis Greenfield Lankford and his wife at their home.

“I always had to make sure to be home from my trips by Sunday morning because I played the organ for my church,” said Upchurch, who still plays for her church today. “Dr. Lankford would get up very early and insist on fixing me a nice hot breakfast before I headed home.”

As president of the alumni association, Upchurch had the chance to meet many alumni, even connecting with fellow Lancers in London while she vacationed in Europe. After her term as president ended, she stayed involved with her class, helping to raise money for scholarships.

Reminiscing from her childhood home in Front Royal, where she moved upon retirement, Upchurch can still remember the Longwood student center of her era, nothing more than one room where students would meet up between classes. Her $4 million gift commitment will help make the dream of a state-of-the-art student center become a reality on the Longwood campus.

The Norman and Elsie Stossel Upchurch Student Center will ensure that future Lancers have much more than a single room in which to gather and a solid foundation from which to grow.