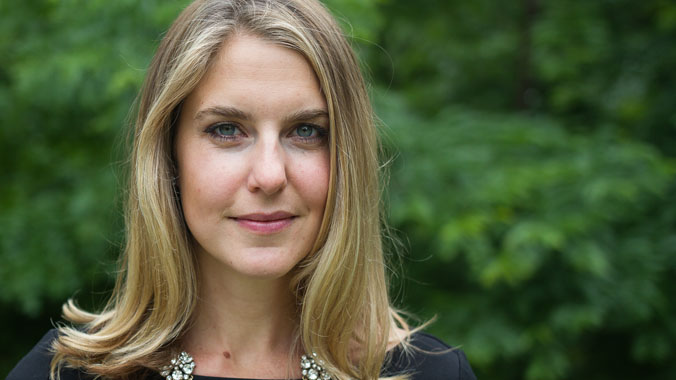 Bryn Mawr College’s Postbaccalaureate Premedical Program provides a rigorous and highly prestigious one-year program for those interested in applying to medical school but lack the required undergraduate prerequisite courses. In the summer of 2015, new alumni feature stories were written for use on the program’s recently re-designed website, targeting prospective applicants.

Working for Google at the headquarters in Mountain View, Ca. To many undergraduate students, it’s their dream job.

After graduating from Pomona College in Southern Ca., Erin Kiskis, who majored in international relations with a minor in economics, worked in investment banking before joining a consumer travel start-up company. She was with the company for one and a half years before Google acquired it.

Following the acquisition, Kiskis began working as an associate product marketing manager for the Google search engine, which included running marketing campaigns, managing social media and organizing other product managers. But a business trip to India made Kiskis re-think her career and make plans for a change.

As an undergraduate student, Kiskis spent time in Eastern Africa, studying economic development. Global issues and an international perspective became an important part of her life, and a draw to Africa an ever-present pull. However, during her sophomore year, Kiskis began having health issues, and she needed to focus on figuring out what was wrong.

“It took me six months to get a diagnosis, but finally, at 19 years old, I was told I had Hodgkin’s lymphoma,” she said. “Twelve weeks of chemotherapy and six weeks of radiation, and to this day, I’m still taken aback by the amazing care I received during that time. They worked treatment around me, and I was able to stay in school and remain myself, despite having cancer.”

Fast forward to India, and Kiskis is meeting with fellow Google staffers at the company’s offices in Hyderabad. A sleek, modern glass building, limos transporting her and her colleagues to luxury resorts. Sightseeing. But Kiskis couldn’t stop looking beyond the walls of her isolated cocoon, thinking about the local people she passed on the street and in traffic.

“Here we were talking about whether it was 1 billion or 2 billion people using Google, and I bet many of these people outside of the building were just wondering how they could get by and provide for their children,” Kiskis said. “I kept wondering, ‘if I lived here and had cancer, would I have gotten the same treatment?'”

Kiskis returned home and began researching postbaccalaureate premedical programs, ultimately choosing Bryn Mawr because of the one-year time frame, rigor and reputation of the program and linkages with some of the best medical schools in the country.

Now through her third year of medical school at the University of Pennsylvania, Kiskis plans to pursue a residency in ophthalmology with the eventual goal of working in academic medicine.

“There’s such a need for ophthalmology care in the developing world, but even more so, medical education,” she said. “It makes a lot of sense to me to use my training to research, teach other doctors and improve the circumstances and health of those existing outside the glass buildings.”