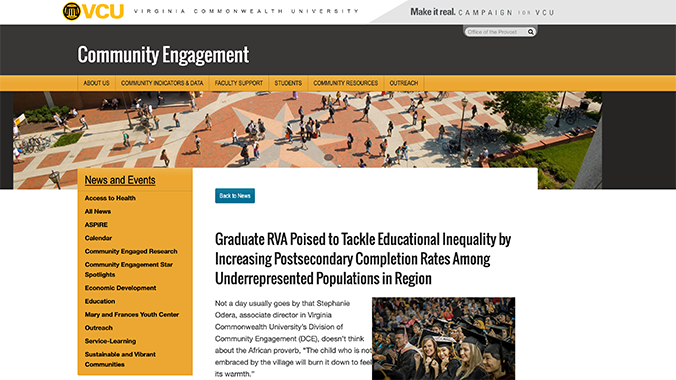 The following feature story was written for Virginia Commonwealth University to profile Graduate RVA’s transition from being part of the Bridging Richmond collaboration.

Not a day usually goes by that Stephanie Odera, associate director in Virginia Commonwealth University’s Division of Community Engagement (DCE), doesn’t think about the African proverb, “The child who is not embraced by the village will burn it down to feel its warmth.”

A social work practitioner, Odera has more than 10 years of experience in the field, including working as a school social worker in Richmond Public Schools and in child protective services for the Virginia Department of Social Services. She’s also a former assistant professor in the VCU School of Social Work, where her teaching and research interests include educational equity, the promotion of racial and economic justice and social work in school settings.

Odera’s background directly lends itself to her current role with Graduate RVA, a college access network that seeks to right educational inequalities in the Richmond region by significantly increasing postsecondary completion rates, with a special focus on underrepresented minorities.

“From a social justice perspective, this is something we have to do,” Odera said. “This is about education being used or being positioned as an intervention, because education is connected to everything – your job, housing, health – and is tied to a person’s ability to climb the social ladder.” If you have parts of a population that are consistently left behind – but are also increasing in number – what do we think is going to happen to our country, state or region?”

Graduate RVA emerged from Bridging Richmond, which over the last 10 years, has catalyzed positive change in the cradle-to-career pipeline, building sustainable capacity to support the educational goals of Virginia residents. Achieving critical components of its mission, the Bridging Richmond partnership was discontinued in June 2019. Graduate RVA continues as an independent program and is anchored at VCU, aligning with university efforts to support improvements in student success and education policy and practice at the regional, state and federal levels. Odera continues to lead college completion efforts, aided by the leadership of Jason Smith, VCU associate vice provost for community engagement.

Smith oversees Graduate RVA and engages in state and federal advocacy, in addition to leadership responsibilities in the DCE. Smith also serves with Higher Learning Advocates (HLA), a non-profit advocacy organization working to advance federal policy surrounding education and training beyond high school. As part of HLA’s Champions Network, Smith collaborates with a group of forward-thinking state and local leaders devoted to improving quality, outcomes and affordability in postsecondary education.

“The driving passion behind my work in higher education really comes from seeing its power to improve economic opportunity, personal mobility and health,” Smith said. “When you hear the individual stories of students who were in very different situations, and how it impacted them, it reminds me that it’s not just the process, it’s not just the policy. Our choices really do make a difference in the lives of individuals.”

In Virgina, more than 1 million workers have some college, but no degree, representing one in five workers. This represents a potential $28 billion in lost earnings and $560 million in foregone state tax revenues. When students transfer from a two-year to a four-year institution before receiving an associate’s degree and don’t complete a bachelor’s degree, they may have completed or be close to completing an associate’s degree without knowing it.

Reverse transferring retroactively awards associate’s degrees to these students through joint degree auditing efforts between community colleges and four-year institutions. Some students are eligible for degree conferment without any additional coursework. Others may need to transfer credits back from the four-year institution to the community college for degree completion.

By targeting people with some college experience, but no degree or credential, Graduate RVA seeks to improve the ecosystem in which students follow the pathway to, through and out of their post-secondary experience with a high-quality degree or credential. Graduate RVA works in partnership with other colleges and universities for collective urban and regional success, across the institutions.

“Higher education institutions that once would have competed for student enrollment are now coming together and supporting each other to accomplish goals for the region,” Odera said. “This is the start of a collective approach to meeting workforce demands and producing the types of credentials and degrees that are needed to have a thriving economy as a region.”

This partnership method has earned Graduate RVA attention on a national level.

In 2017, Lumina Foundation in partnership with Kresge Foundation, announced Richmond as one of the 17 initial communities across the country designated as a Talent Hub, or a community that has organized and aligned to create multiple pathways to retain, attract and cultivate talent. As a Talent Hub-designated city and partnership, Graduate RVA will receive $350,00 in grant funding over 3 ½ years to support local efforts to educate more people, allowing community and post-secondary leaders to better meet the specific needs of residents.

“Graduate RVA has proven results that show partners can accomplish more together than they can alone,” Pawlicki said. “Graduate RVA is an exemplar of how these multi-sector partnerships can operate, meeting regional workforce, education and citizen needs. Lumina supports Graduate RVA as one of few exemplars, to not only spur their bold plans for the future, but also to serve as a beacon for other communities and cities to model from.”

In September, Graduate RVA representatives will attend the Lumina Learning Lab hosted Los Angeles. An invitation-only gathering for designated Talent Hubs, Richmond will be among nine regional collaboratives from states including California, New York, Pennsylvania and Texas to attend the lab in order to share progress and impact data and work on strategies that drive system change in support of attainment.

“The Talent Hub teams in attendance at the Learning Lab represent some of the most engaged and committed national change agents in the field,” said Sara Lundquist, strategy consultant at Lumina Foundation. “Graduate RVA is a model practice that is considered a positive and powerful system change, ripe for adaptation to other institutions nationally.”

A key accomplishment that Graduate RVA will share with Talent Hub peers is the recent commitment of core partners to integrate Graduate RVA’s goals and strategies into their own strategic plans to ensure that the equity-centered student success work is aligned across separate institutions.

“Whether you take the moral imperative that no one should be left out of opportunity and the ability to participate fully in society, or whether you take a purely economic standpoint that when people are working at their highest potential, there is more to contribute back to the state’s economy, there is room for you to get behind this effort,” Smith said. “This is essential work no matter which lens you look through.”