JoAnne Fischer: Twenty-Five Years of Helping Families Get Off to the Right Start 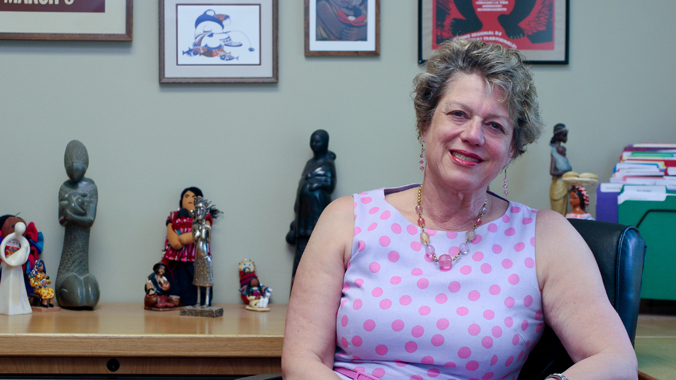 In 2015, Bryn Mawr College’s Graduate School of Social Work and Social Research celebrated its 100th anniversary. To mark the occasion, a series of feature stories were written to showcase alumni who embody the school’s mission of “Professionals for Purposeful Action.”

Read the feature in the anniversary publication (PDF)

Ask JoAnne Fischer, MSS ’73, what her passion points are, and she quickly tells you women’s health and a commitment to feminism, birth and motherhood empowering women and evidence-based support for women, children and families.

“For women to have full participation in society, reproductive rights and health is essential,” Fischer said. “When we become mothers, we change who we are, and we have this incredible opportunity to invest in the next generation.”

As the oldest of four girls and a lifelong participant in Girls Scouts, Fischer always considered herself a leader, a feminist and someone interested in the development of girls and women. But it was her time at Bryn Mawr that set the course for her life’s work.

During Fischer’s second-year field placement, she worked directly with Walter Lear, a physician and community activist who was also the regional health commissioner for the Pennsylvania Department of Health.

“It was such a non-traditional placement, but it opened up a whole other world for me in terms of working in healthcare and how that related to community organizing, social policy and advocating for women,” Fischer said. “Walter [Lear] taught me about the political economy of healthcare, and I taught him about feminism.”

Lear would later hire Fischer as a consultant to kick-start the women’s health movement in Pennsylvania,

which ultimately led to Fischer working at the Maternity Care Coalition (MCC), an organization Lear helped found in 1980

MCC improves maternal and child health and wellbeing through research, advocacy and services for families. More than 5,000 families are served every year through initiatives that include the state’s largest Early Head Start program, Cribs for Kids and MOMobile program.

“We want to make sure the programs that are implemented at MCC actually make a difference, so we invest in research and evaluation,” Fischer said. “We’re on the cutting edge of globally-significant work that includes programs for incarcerated mothers and making health reform work for women.”

Fischer’s leadership in these areas earned her the White House’s Champion for Change award in 2012. She credits Bryn Mawr with supporting her in achieving a successful career in public interest and for giving her a robust network to call home.

“The empowerment of women to become global leaders and the concept of women as scholars permeates the place,” Fischer said. “So many of my colleagues from Bryn Mawr are running other agencies – it’s an incredible network of ‘sisters’ and quite the alumni club.”

“So many women are just out there on their own during such a transformational time in their lives and their children’s lives,” Fischer said. “It’s really very urgent and critical to get families off to a good start earlier, and there’s so much we can do if we just make this a social priority.”