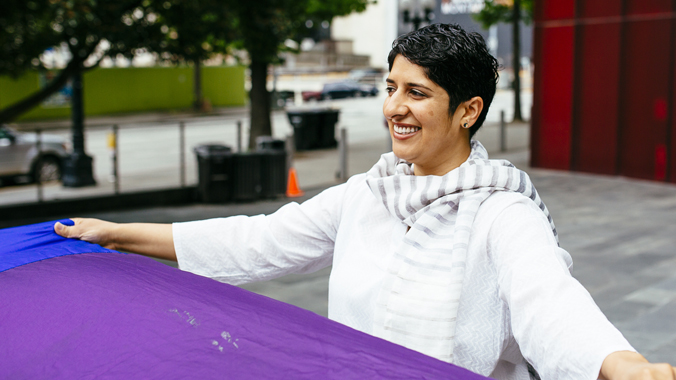 In 2015, Bryn Mawr College’s Graduate School of Social Work and Social Research celebrated its 100th anniversary. To mark the occasion, a series of feature stories were written to showcase alumni who embody the school’s mission of “Professionals for Purposeful Action.”

Read the feature in the anniversary publication (PDF)

“Every individual has the best knowledge and experience about his or her own life,” said Sabina Neem, MSS/MLSP ’07. “People are their own best judge for what is right for them, and it’s a social worker’s job to be non-judgmental and give people the tools to make healthy decisions. Shame is a poor motivator for long-term change.”

This philosophy has guided Neem throughout her career working with LGBTQ youth on HIV education and prevention; providing clinical services for teenage girls in a residential treatment facility; and supporting the academic activities of inner-city youth.

“In my life and in my career, I want to actively create the kind of world I want to wake up in every day – a world without all of this inequality,” said Neem.

Now the associate director in Seattle University’s Office of Multicultural Affairs, Neem builds bridges across the campus community to support students of color and LGBTQ students at the private Jesuit Catholic university.

“I’m in a position to shift a larger institutional culture and build a healthy campus climate,” Neem said. “We’re working to create the environment they want to be part of, in an institutional setting that historically was not designed with them in mind. When I interact with the students here on campus, many of them remind me of the people I used to work with, it’s just these are the young adults who made it.”

In the spring of 2012, Neem mentored students involved in the Diversity and Equity Education Program as they led the campus community in organizing the “Amplify Voices: A Queer Justice Rally.” During the campaign, students asked for more resources for the LGBTQ community on campus, including support for an LGBTQ resource center, gender inclusive bathrooms and housing and more courses focused on gender and sexuality. Letters to the university’s president, petitions and symbolic events highlighted support for inclusion of LGBTQ students on campus, including marriage equality in a Catholic context.

“This is one of the initiatives I’ve been the most proud of,” Neem said. “In mentoring this group of students, I encouraged them to be respectful of the university’s history and its administration. We practiced a harm reductionist approach in making voices heard through non-violent and symbolic gestures.”

Within the larger Seattle community, Neem co-chairs the city’s LGBT Commission, representing the concerns of LGBTQ citizens to the mayor, city council and city departments. In 2013, she spearheaded the effort to kick off the Seattle Pride Celebration by raising the Pride flag at city hall, showing the city’s support of the LGBTQ community. During this time, she also advocated in solidarity with workers for the Seattle Space Needle to settle a fair labor contract and fly the Pride flag.

“Throughout my career, I’ve always felt a deep sense of interconnectedness, and I’ve tried to embody the position as advocate – for individuals and communities,” Neem said. “Bryn Mawr is where I learned to articulate the difference between altruism and solidarity.”