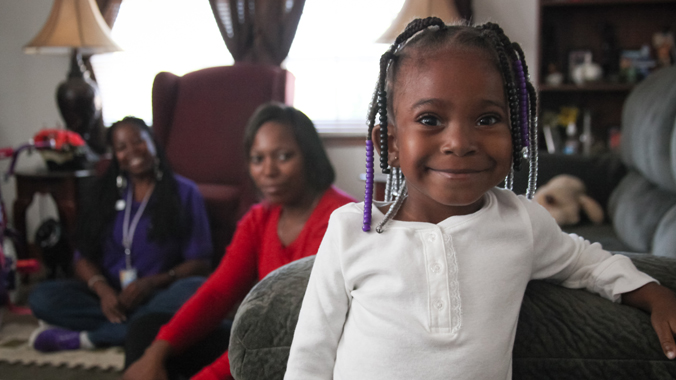 Longwood University’s Speech, Hearing and Learning Services offers professional speech-language, educational and early intervention programs to children and families in Southcentral, Va. In the fall of 2013, the program was moving to a brand new space in downtown Farmville and was preparing to offer a range of expanded services to families in a seven-county region.

At eight months old, CiNyah Glover of Farmville, Va., wasn’t rolling over or crawling. She would sit up, but only if she was propped up on a pillow.

“I would put her on her stomach to try and get her moving, and she would just cry and scream,” said Christy Booker, CiNyah’s mother.

CiNyah’s pediatrician referred Booker to the Infant and Toddler Connection (ITC) of the Heartland for help with CiNyah’s gross motor skills. The program provides early intervention services to children ages birth to 3 years. ITC is part of Longwood University’s Speech, Hearing and Learning Services, which offers professional speech-language, educational and early intervention programs to children and families in Southcentral, Va.

“Often we never know the specific reasons why a child experiences delays in their development,” said Kavonda Jordan-Dean, the ITC service coordinator who worked with CiNyah. “We work collaboratively with families and physicians to determine a possible cause, but ultimately our team members are here to support families by providing strategies they can embed into their daily routines with the goal of reducing delays and increasing opportunities for success regardless of the causes.”

The program’s clinicians, who are also faculty at Longwood University, work in conjunction with graduate students in the university’s speech-language pathology program. CiNyah was initially seen once a week by an occupational therapist who provided parent coaching on neuro-development, sensory motor treatment and developmental motor skills.

“The parent is seen as the expert on his or her child, and the clinician is seen as having a ‘tool box’ of strategies to help families,” said Jordan-Dean. “Our tools are based on best practice, research and experience. The goal for the clinician is to increase parental confidence and skills so that they can practice the activities on their own.”

ITC is the only program in the commonwealth that provides services to families in their child’s natural environment, meaning the location where the child is during the day. Clinicians travel to daycares, homes and places in the community, which is a vitally important service to families in rural areas.

“When they would come to the house, CiNyah would get so excited,” Booker said. “They would play with her and encourage her, lining up her toys so she would move toward them and have her pick things up and put them in a basket. We’d keep trying things and setting new goals as she made progress. I would have been working with her regardless, but it was good to have experts helping and showing me new things to try.”

After working with the staff for several months, CiNyah celebrated her first birthday and marked the occasion by perfecting her crawl. At 17 months, she started walking. Now at 2 ½, she’s going up and down stairs, jumping and running.

“Now she’s all over the place – it’s hard keeping up with her, and she’s talking and learning all the time,” Booker said. “It’s really amazing the progress she’s made. I know she eventually would have learned everything, but it would have taken much longer without help.”