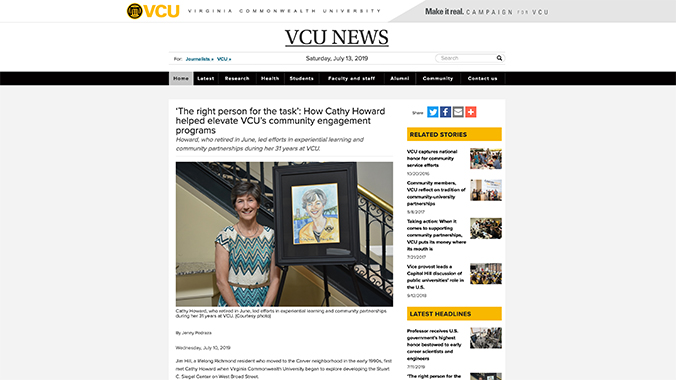 In June 2019, Virginia Commonwealth University’s vice provost for community engagement retired after 31 years of service to the university. The following article was written for VCU News and appeared on the university’s homepage, as well as other university websites and outlets.

“Make no mistake, the institutional trust was not initially a given,” Hill said. “But VCU had the great fortune of having exactly the right person for the task in Cathy Howard.”
From the first meeting with the community, Hill said, Howard fostered an environment where trust and communication could take root.

“As I hopped off the Pulse on the way here, there was a beautiful statue of Maggie Lena Walker,” said Gypsy M. Denzine, Ph.D., senior vice provost for faculty affairs. “It said she imparted a legacy of service, activism and empowerment. …That’s you, Cathy. … You have led a life and career of service and have impacted thousands of students, colleagues, citizens of Richmond and … colleagues across the country.”

Throughout her tenure at the university, Howard served as an integral force of connection between VCU, its surrounding neighborhoods and the greater community. Under her leadership, VCU received national recognition for community engagement from the Carnegie Foundation for the Advancement of Teaching. VCU is one of 240 U.S. colleges and universities to receive the foundation’s 2015 Community Engagement Classification.

“Community engagement has permeated our culture here — we are on the map,” she said. “VCU is now known nationally for our work building partnerships with our neighbors. Working together, we have connected the community with the university to address critical needs and tap into opportunities right in front of us.”

An area of continued growth under Howard has been student involvement in experiential learning related to community engagement. More than 4,000 VCU students take part in 250 service-learning classes across the disciplines. This teaching model allows students to participate in organized service activities that meet community-identified needs while earning course credit.

A career built on connecting people

After earning a doctorate from Penn State, Howard came to VCU in 1988 to join the Department of Psychology, serving as the primary investigator for grants from the Center for Substance Abuse Prevention. In 1996, Howard was named director of the VCU Office of Community Programs, which later became the Division of Community Engagement. In 2006, Howard was named the first vice provost of community engagement when VCU identified community engagement as a central theme in its strategic plan.

Howard has been a mainstay, both locally and nationally, in her commitment to her profession and her community. She serves on the Association of Public and Land-grant Universities’ Council of Engagement and Outreach executive committee. She is a founding member of Virginia Mentoring Partnership and serves on the board of directors for the Northside Family YMCA, the United Way of Greater Richmond & Petersburg, the Monroe Park Conservancy and the steering committee for the Future of Richmond’s Past.

Timothy Davey, Ph.D., vice provost for faculty affairs, worked alongside Howard in many roles over the years, serving on the university’s Council for Community Engagement. The council’s awards program annually recognizes exemplary community-university partnerships, and in previous years awarded grants to support community-engaged programs and projects.

“The work Cathy has done over the last 30-plus years is truly impressive, and although her work is impressive, what’s even more impactful is the type of person she is — kind, humble, warm,” Davey said. “She is one of those rare colleagues who has both local and international impact.”

The Carver-VCU Partnership that Howard helped create wound up being a model for future community engagement. In recent years, the Carver partnership has expanded to other communities adjacent to VCU, including the Fan, Jackson Ward, Oregon Hill and Randolph.

“Universities are often in the place where they want to tell you what things should be, but they also have the power to help communities figure out what they could be. Let’s build on Cathy’s legacy … and move that forward,” Vanessa Diamond, senior vice president of the Community Foundation and co-founder of HandsOn Greater Richmond, said at Howard’s retirement celebration.

If you ask Howard what she sees next for VCU in community engagement, she emphasizes the need to continue focusing on supporting faculty to become tenured as community-engaged scholars; investing in experiential learning opportunities that allow students to engage with the community; and building on sustained community-university partnerships.

“What I have learned over the years is that the needs of the community are not based on a sole discipline,” Howard said. “When you bring people together from across campus, show them the challenges and the opportunities in the community and then support them in their work, you start to see them become excited about the connections and the possibilities. That’s when the magic happens.”

Cathy Howard’s legacy will continue through a new scholarship established in her honor. The Catherine W. Howard scholarship will support community-engaged internships, allowing students to have meaningful experiences interning in nonprofit settings.

“We recognize that for a lot of students, especially first-generation students, they don’t have the expansive network to connect with internship and job opportunities,” Howard said. “This scholarship will help further those connections and experiences while addressing critical community needs in a nonprofit setting.”