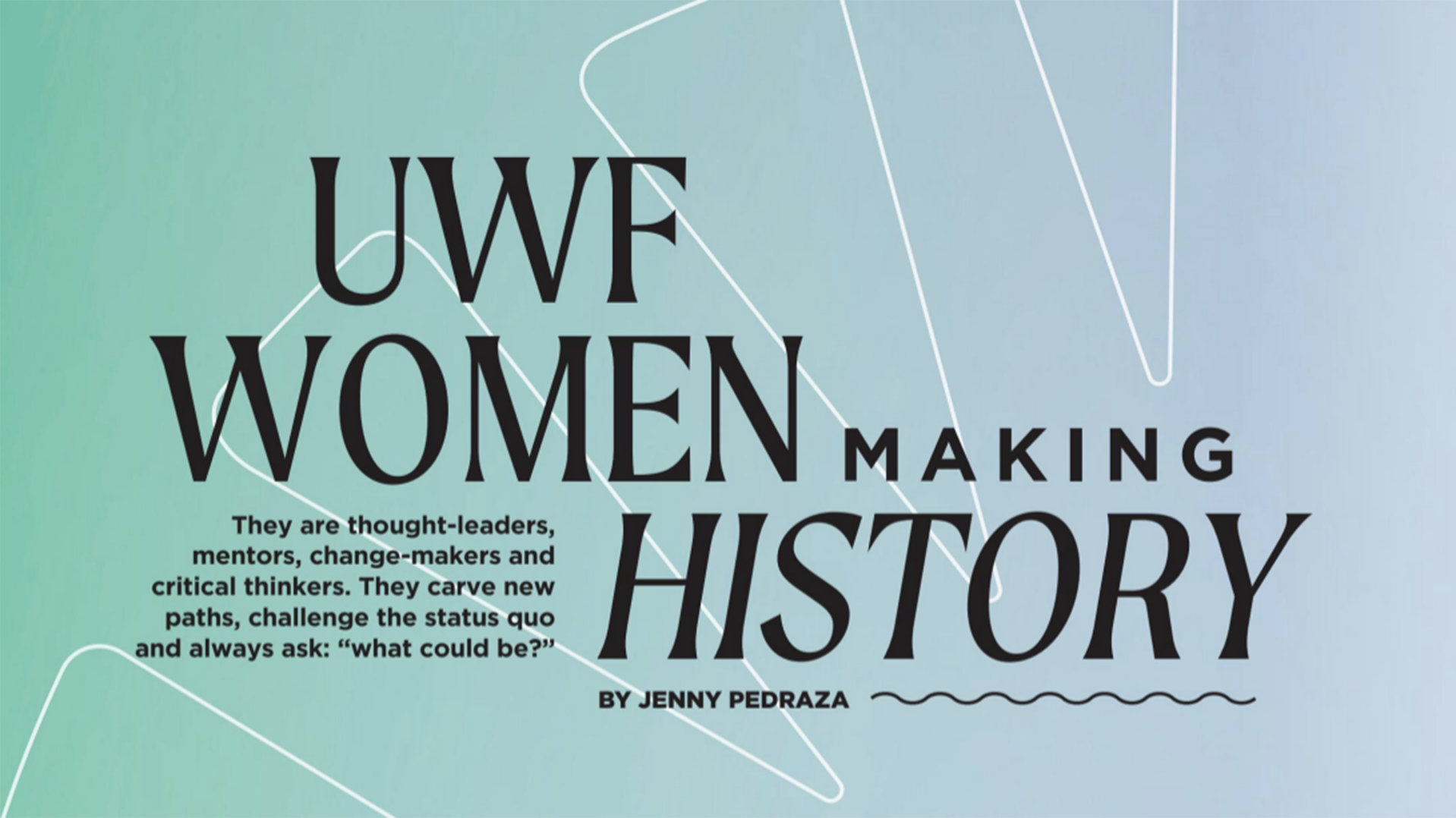 The article below was written for the cover of the University of West Florida’s Spring 2022 alumni magazine, Connection.

They are thought-leaders, mentors, change-makers and critical thinkers. They carve new paths, challenge the status quo and always ask: “what could be?”

“When you break a glass ceiling, it leaves jagged edges,” said University of West Florida President Martha D. Saunders. “I believe it’s my job to help smooth out those edges so the next woman coming up doesn’t get cut.”

Saunders knows a thing or two about busting through glass ceilings.

After working in advertising and public relations and later in secondary education, Saunders began as an adjunct professor in the UWF Department of Communication Arts. She rose through the ranks at the University, serving as the coordinator for the public relations program, director of the University Honors Program, dean of the College of Arts and Sciences, provost and executive vice president. In her 30-plus years in higher education, Saunders served in academic and leadership roles at universities in Florida, Georgia, Wisconsin and Mississippi. She became UWF’s sixth president in 2017.

Saunders’ drive and innovative spirit represent core values at UWF. Thousands of women—faculty, staff, alumni and students—have helped make UWF what it is today. Their leadership, intelligence and compassion have changed the University’s course—and the course of all the women who will come after them.

These are just some of their stories.

In 2012, Dr. Sherry Hartnett joined the UWF College of Business faculty. A seasoned marketing professional, she previously served as vice president and chief marketing and development officer for a regional healthcare system. She also founded Hartnett Marketing Solutions and Hartnett Learning Academy, a consultancy specializing in marketing and leadership development.

Hartnett was ready to put her experience as a senior marketing executive to work in academia—not just to show students the ropes of digital and social media marketing—but to also tap into another facet of her career: mentoring.

Hartnett was brought on board to launch the UWF College of Business’ Executive Mentor Program, connecting undergraduate and graduate students with executives for career mentoring. During the initial planning for one of her first programs, Hartnett realized she was on to something bigger.

“We were going to bring in a woman executive to speak on campus,” Hartnett said. “And I remember thinking, ‘There’s so many great women to consider. This really could be a panel instead.’ And from that panel, thinking, ‘Wow, this could really be a full conference.’ And then it just kind of exploded.”

UWF will host the eighth annual Women in Leadership Conference on March 11 at the UWF Conference Center, bringing together more than 400 women in-person, with even more attending via a new virtual option. UWF students, young professionals and those more senior in their careers will hear from women in leadership, including CEOs from across the state, as they share their stories, both personal and practical.

“Every year, women walk out of the conference inspired and motivated by each other,” Hartnett said. “That’s really what mentoring is all about—helping people grow in their career and their own direction. Women who support women, at the end of the day, are more successful themselves. You can lift others up while you climb.”

“I like to shine a light on the good things that could happen if we run with an idea,” said Dr. Leasha Barry, professor and director of the UWF Center for Behavior Analysis. “Instead of convincing someone to help you, I like to show people how something new could support what they’re already doing or what they want to accomplish.”

Barry has been “getting things done” at UWF since the early 2000s when she began offering applied behavior analysis courses. UWF is now a leading resource for individuals interested in a career in ABA, with 10 graduate courses and five undergraduate courses and 1,000 new enrollments a year. A recent partnership with Dr. Angela Hahn, chair and clinical assistant professor in the Department of Health Sciences and Administration, has paved the way for a new ABA minor.

While ABA is the most widely accepted evidence-based treatment for autism, there are many applications in clinical, educational and occupational settings, including workplace safety, corrections and rehabilitation.
Last summer, the UWF Center for Behavior Analysis partnered with Autism Pensacola on Sensory Street at the Museum of Commerce in Historic Pensacola. The UWF team used behavior analysis to help provide families impacted by autism with a safe environment to practice important community-based skills, like going to the bank or visiting the dentist for a cleaning.

“I feel fortunate that UWF has been so supportive and that there is a spirit of collaboration on campus,” Barry said. “Growing this center took frank conversations and learning from setbacks. I knew I had to advocate for what I believed could work. It was about never being afraid to ask.”

If there’s one thing Dr. Cynthia Smith Peters, undergraduate program director and assistant professor of clinical practice in the UWF School of Nursing, hopes her nursing students remember when they graduate and begin their careers in healthcare, it’s to never forget “why they chose nursing.” It is important to provide holistic care with the consideration of the client’s individual care needs; family; and the importance of care and empathy.

This lesson of personal connection and compassion reflects the culture of UWF’s highly successful nursing program, which graduates more than 140 students each year. In 2020, more than 95% of graduates passed the National Council Licensure Examination-Registered Nurses on their first attempt, surpassing the national average for first-time pass rate by over five percentage points and exceeding the state mark by nearly 10 points.

Smith Peters said it’s a combination of things that she thinks prepares UWF nursing students so well for their future careers. In addition to rigorous coursework, she credits a team of nursing faculty, staff, administration, and clinical partners who pull together and work toward the common goal of supporting their students 24/7.

“This field is so important in our society. Our students are building a foundation to be able to help so many people over the lifetime of their careers,” Smith Peters said. “We are teaching them to step outside of their comfort zones, keep pushing themselves forward and above all else, always do the right thing. It is an honor to teach the next generation of caring and compassionate nurses!”

Tori Bennett ’12, ’16
Director of development, Division of University Advancement and former UWF soccer player, secured a gift in excess of $8.5 million—the largest gift to the University from a living donor. The historic gift from the late Dr. Herman and Valerie Rolfs through their estate created the Dr. Grier Williams School of Music and will provide significant scholarships and resources for music students annually.

Dr. Judy Bense
President Emeritus and professor of anthropologyDr. Judy Bense served as UWF’s fifth—and first female—president from 2008 to 2016, focusing her tenure on growth, visibility, enhancing the student experience and building partnerships. She founded the UWF Division of Anthropology and Archaeology and established the Archaeology Institute, serving as director for 20 years.

“UWF is the land of opportunity. As a woman, UWF has supported me professionally by recognizing my talents and ability to do my job, which has allowed me to rise through the ranks in the police department. Each day, there is a different situation or person who needs guidance or help along the way—it’s what I love most about my job.”
– Deb Fletcher ’10, assistant chief, UWF Police

Mamie Hixon ’82
Director of the Writing Lab and assistant professor of English
Mamie Hixon established the UWF Writing Lab in 1982. The lab helps students with grammar, style and mechanics of writing. In addition to her work helping students at UWF, Hixon is a professional editor, radio and television grammarian, motivational speaker and workshop organizer and presenter.

“My experience at UWF was rare in that I had the opportunity to work with two female presidents. For the majority of my time at UWF, the cabinet was primarily female as well. The strong examples of women in leadership are good for everyone on campus.”
– Dr. Kim LeDuff, former vice president, Division of Academic Engagement & Student Affairs and chief diversity officer. Under LeDuff’s leadership, UWF earned six Higher Education Excellence in Diversity Awards from Insight into Diversity magazine.

Ashliegh McLean ’13
Head coach, UWF softball
In her first year as head coach in 2018, Ashliegh McLean led the UWF softball program to a Gulf South Conference Championship, a South Region Title and the NCAA Championship. In 2021, she earned her 100th career win, and her 104-36 career record is better than any other current coach in the GSC during their first three seasons. McLean was named the GSC Coach of the Year in 2019.

“My advice to women is to stay focused on what they really want to do and to design a plan that puts them in a position to fulfill their desires and vocation. Work hard to put yourself in a situation where your achievements cannot be overlooked.”
– Dr. Brent Venable, inaugural director of the intelligent systems and robotics doctoral program

“I am proud to be building on the history of female leadership at the Pensacola Museum of Art. I am motivated by connecting with the community through art and sharing the work of artists. Telling diverse stories through our exhibitions and stoking the curiosity and engagement of our visitors keeps me going each day.”
– Anna Wall, chief curator, Pensacola Museum of Art at the University of West Florida. PMA was founded in 1954 by a group of women that envisioned a community space for visual art and culture.

Melissa Wolter
Head coach, UWF volleyball
Melissa Wolter is a five-time Gulf South Conference Coach of the Year, the 2010-19 GSC Coach of the Decade and was named the American Volleyball Coaches Association All-Region Coach of the year in 2012. Wolter has led the Argos to 16 seasons with 20 or more wins and 14 consecutive NCAA tournament appearances.