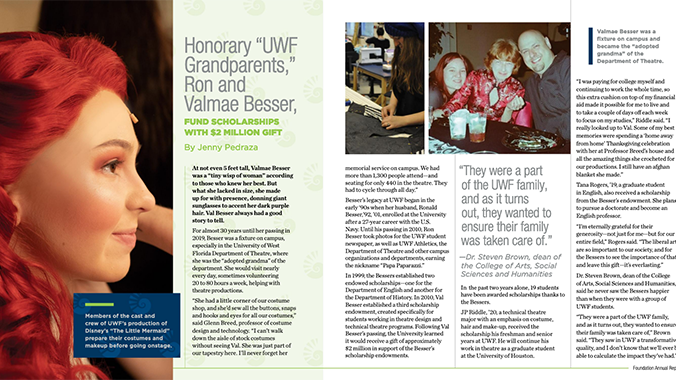 The article below was written for the University of West Florida’s 2019/2020 Foundation Annual Report.

At not even 5 feet tall, Valmae Besser was a “tiny wisp of woman” according to those who knew her best. But what she lacked in size, she made up for with presence, donning giant sunglasses to accent her dark purple hair. Val Besser always had a good story to tell.

For almost 30 years until her passing in 2019, Besser was a fixture on campus, especially in the University of West Florida Department of Theatre, where she was the “adopted grandma” of the department. She would visit nearly every day, sometimes volunteering 20 to 80 hours a week, helping with theatre productions.

“She had a little corner of our costume shop, and she’d sew all the buttons, snaps and hooks and eyes for all our costumes,” said Glenn Breed, professor of costume design and technology. “I can’t walk down the aisle of stock costumes without seeing Val. She was just part of our tapestry here. I’ll never forget her memorial service on campus. We had more than 1,300 people attend—and seating for only 440 in the theatre. They had to cycle through all day.”

Besser’s legacy at UWF began in the early ‘90s when her husband, Ronald Besser,’92, ’01, enrolled at the University after a 27-year career with the U.S. Navy. Until his passing in 2010, Ron Besser took photos for the UWF student newspaper, as well as UWF Athletics, the Department of Theatre and other campus organizations and departments, earning the nickname “Papa Paparazzi.”

In 1999, the Bessers established two endowed scholarships—one for the Department of English and another for the Department of History. In 2010, Val Besser established a third scholarship endowment, created specifically for students working in theatre design and technical theatre programs. Following Val Besser’s passing, the University learned it would receive a gift of approximately $2 million in support of the Besser’s scholarship endowments.

In the past two years alone, 19 students have been awarded scholarships thanks to the Bessers.

JP Riddle, ’20, a technical theatre major with an emphasis on costume, hair and make-up, received the scholarship his freshman and senior years at UWF. He will continue his work in theatre as a graduate student at the University of Houston.

“I was paying for college myself and continuing to work the whole time, so this extra cushion on top of my financial aid made it possible for me to live and to take a couple of days off each week to focus on my studies,” Riddle said. “I really looked up to Val. Some of my best memories were spending a ‘home away from home’ Thanksgiving celebration with her at Professor Breed’s house and all the amazing things she crocheted for our productions. I still have an afghan blanket she made.”

Tana Rogers,’19, a graduate student in English, also received a scholarship from the Besser’s endowment. She plans to pursue a doctorate and become an English professor.

“I’m eternally grateful for their generosity—not just for me—but for our entire field,” Rogers said. “The liberal arts are so important to our society, and for the Bessers to see the importance of that and leave this gift—it’s everlasting.”

Dr. Steven Brown, dean of the College of Arts, Social Sciences and Humanities, said he never saw the Bessers happier than when they were with a group of UWF students.

“They were a part of the UWF family, and as it turns out, they wanted to ensure their family was taken care of,” Brown said. “They saw in UWF a transformative quality, and I don’t know that we’ll ever be able to calculate the impact they’ve had.”