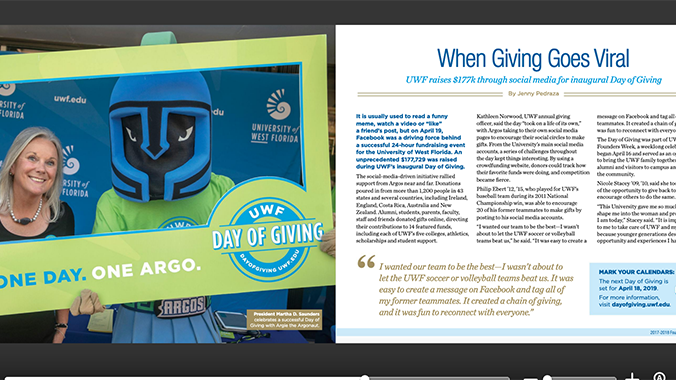 The article below was written for the University of West Florida’s 2017-2018 Foundation annual report.

More than just an avenue to scroll past a funny meme, “like” baby and vacation pictures or read an update from a friend, Facebook became the central way the University of West Florida was able to raise an unprecedented $177,729 during UWF’s inaugural Day of Giving, held April 19.

The social-media-driven, 24-hour initiative rallied all Argos to come together to support the University and its programs. Alumni, students, parents, faculty, staff and friends made gifts online, directing their contributions to 14 featured funds, including each of UWF’s five colleges, athletics, scholarships and student support.

Donations came in from 1,263 people in 43 states and several countries, including Ireland, England, Costa Rica, Australia and New Zealand.

Kathleen Norwood, UWF annual giving officer, said the day “took on a life of its own,” with Argos taking to their own social media pages to encourage their social circles to make gifts. From the University’s main social media accounts, a series of challenges throughout the day kept things interesting. By using the crowdfunding website CommunityFunded.com, donors could track how their favorite funds were doing, and competition became fierce.

Philip Ebert, ’12, M.Ed.’15, who played for UWF’s baseball team during its 2011 national championship win, was able to encourage 20 of his former teammates to make gifts by posting to his social media accounts.

“I wanted our team to be the best – I wasn’t about to let the UWF soccer or volleyball teams beat us,” he said. “It was easy to create a message on Facebook and tag all of my former teammates. It created a chain of giving, and it was fun to reconnect with everyone.”

Nicole Stacey, ’09, MA ’10, said she was eager to accept a giving challenge that day: make a gift and then post about it on social media, tagging your UWF friends.

“This University gave me so much and helped shape me into the woman and professional I am today,” Stacey said. “It is important to me to take care of UWF and my college because younger generations deserve the same opportunity and experiences I had.”

The Day of Giving was part of UWF’s inaugural Founders Week, a weeklong celebration that began April 16 and served as an opportunity to bring the UWF family together, welcome alumni and visitors to campus and give back to the community.

Mark your calendars: the next Day of Giving is set for April 18, 2019. For more information, visit dayofgiving.uwf.edu.