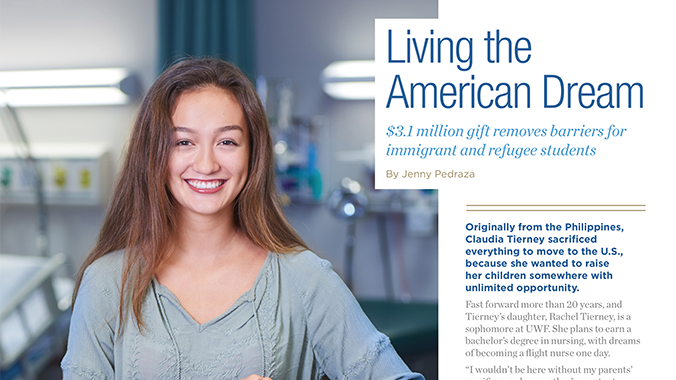 The following article was written for the 2016-17 University of West Florida Foundation annual report.

Originally from the Philippines, Claudia Tierney sacrificed everything to move to the U.S., because she wanted to raise her children somewhere with unlimited opportunity.

Fast forward more than 20 years, and Tierney’s daughter, Rachel Tierney, is a sophomore at UWF. She plans to earn a bachelor’s degree in nursing, with dreams of becoming a flight nurse one day.

“I wouldn’t be here without my parents’ sacrifices and my mother’s constant motivation and encouragement, but that only goes so far,” Rachel Tierney said. “There just aren’t the financial resources left over to support my higher education. No matter how hard I work, there are always financial problems to face.”

Rachel Tierney found out in August that she was one of the first recipients of the University’s American Dream Scholarship, which provides funding to enhance accessibility to higher education for UWF students, with a preference given to immigrants and refugees. The scholarship endowment was funded by an anonymous $3.1 million gift that was announced in March. Recipients are awarded $2,000 per year, which can be used for any educational expense, including tuition and fees, housing and meals or books and supplies.

“The first thing I did after I found out was call my mom,” she said. “It’s incredible to think there are people out there who are selfless enough to fund a complete stranger’s education. There’s a shift now from focusing on how to stay in college another year to focusing on graduation. It feels like I’m finally able to gain a foothold on my life.”

With the additional scholarship funds, new student enrollment is projected to increase by approximately 30 percent over the next several years.

“Removing financial barriers enables us to attract and retain a talented and diverse student body,” UWF President Martha Saunders said. “It’s really amazing, the incredible foresight and generosity a gift like this represents. This is the kind of gift that will impact the lives of so many individual students, and the ripple effects of that will be forever felt in the region.”

Nahshon Benoit, junior mechanical engineering major, also received the scholarship. The son of Haitian immigrants and the oldest of seven siblings, he said he wants to be an example to his brothers and sisters that hard work pays off.

“We often hear success stories about people who are living out their dreams, and we are made to think that they achieved this by themselves, but I’ve learned that most times, this isn’t the case, there was incredible support along the way,” Benoit said. “I want to be the best at what I do and take advantage of every opportunity. With this scholarship, I’m much closer to finally grasping my dream.”